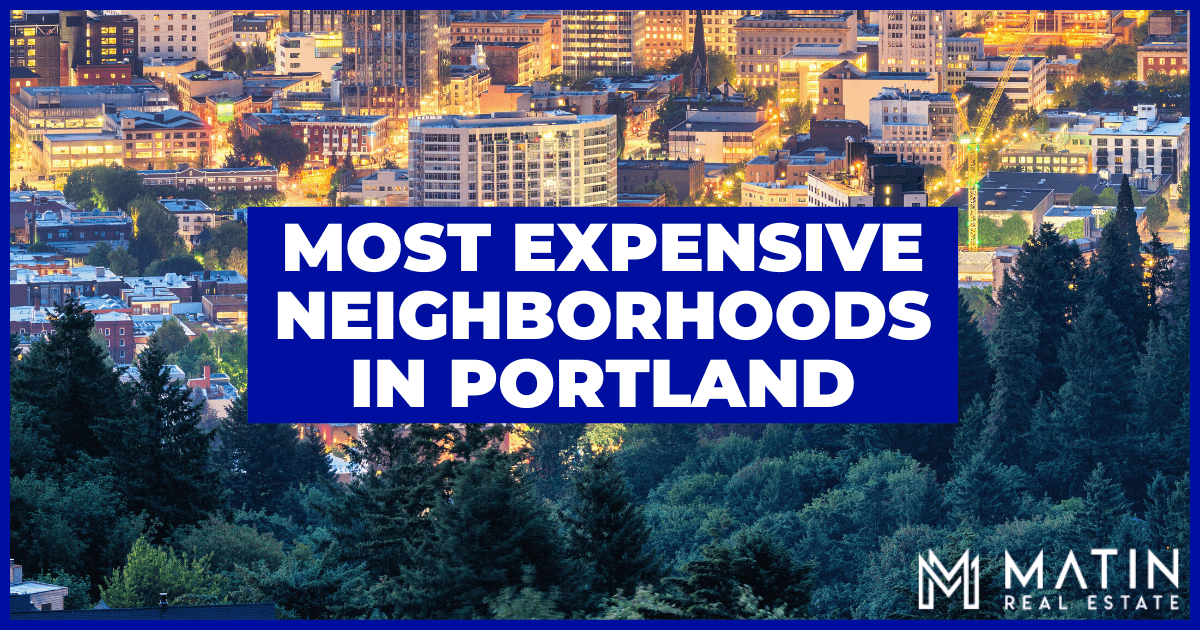 Nestled 70 miles east of the west coast, the city of Portland, Oregon, is considered one of the most desirable towns to live in the country. With just over 652,000 residents, Portland is the second-largest city in the Pacific Northwest. As a major port city in the Willamette Valley, Portland is an incredibly vibrant, diverse city with over 90 distinct communities. Keep reading to learn more about the eight most expensive neighborhoods in Portland.

Nestled in the southwestern hills, Portland Heights is a picturesque neighborhood with tree-lined streets, winding roads, and a blend of stately, historic homes and quaint Portland cottages. Portland Heights is home to some of the area's most stunning properties. Many homes are situated on the hill, overlooking Portland and Mt. Hood. Prospective homeowners will find many single-family homes in various architectural styles, including Queen Anne, Craftsman, English cottage, Colonial, and Traditional. The lower end of the district also boasts charming condos and townhouses. Portland Heights residents can also buy vacant land and build their dream home overlooking the city below. Home prices in this neighborhood typically range from $800,000 to over $5 million.

Best known for its central location and beautiful properties, the Dunthorpe community is just 10 minutes south of downtown Portland. Situated just north of the Lake Oswego community and west of the Willamette River, Dunthorpe has a history dating back to the early 20th century. Founded in 1916, the Ladd Estate Company purchased 215 acres of land from the Oregon Iron & Steel Company for $1. This land was then turned into a residential neighborhood that would later become Dunthorpe.

Today, Dunthorpe is one of Portland's most established neighborhoods, conveniently located near Lewis & Clark College and natural green spaces, including Tyron Creek State Natural Area, one of the city's most popular hiking destinations. Dunthorpe is also home to many restaurants and coffee shops. Some of the most popular cuisine in the neighborhood includes pizza, Thai, baked goods, American, and Mexican.

Dunthorpe primarily consists of traditional, single-family homes on ample lots. When the neighborhood was first formed, one of the stipulations was that all lots had to be a minimum of 20,000 square feet, yet many yards are substantially larger, comprising one or more acres of land. Home prices in Dunthorpe typically range from $1.4 million to over $4 million.

Nestled in the southwest region of Portland, the Green Hills community, as its name suggests, is a quiet, serene neighborhood with an abundance of parks and walking trails. Situated only 15 minutes away from downtown Portland, Green Hill strikes an ideal balance between green spaces and big-city amenities just a short distance away. Commuters have easy access to some of Portland's major roads, including Highway 26, I-5, and I-405, which has increased the neighborhood's desirability, especially for Portland residents who prefer a tight-knit community within the heart of the city.

Green Hills is best known for its green spaces, and some of the area's most popular parks include Albert Kelly Park and Hamilton Park, which contain many of the neighborhood's hiking trails. While Green Hills does not have many shops and restaurants due to its heavily residential nature, they are just a short drive away. Green Hills is also a short distance from the Oregon Zoo and Washington Park, two popular destinations in Portland.

Green Hills residents have plenty of options for quality housing, including Portland condos and single-family homes. A variety of home styles exist in the area, including one-story, two-story, and split-level properties. Real estate prices in the Green Hills neighborhood generally range from $250,000 to over $5 million.

A historic neighborhood, Portland has many designated historical landmarks within Terwilliger's borders, making the community an incredibly charming, storied area. One of the draws of Terwilliger is its accessibility to downtown Portland. Oregon Health and Sciences University has an aerial tram that services the neighborhood. While the tram's installation was controversial, many residents take advantage of this Portland public transit service. Terwilliger is also conveniently located near I-5, giving commuters easy access to the city.

Prospective buyers in this historic neighborhood have various housing options, from charming condos to traditional single-family homes. Buyers can also purchase lots and build a new construction home in this lively area. While home prices vary based on home size and style, real estate prices in Terwilliger usually range from $350,000 to over $6 million.

Ladd's Addition offers an eclectic mix of single-family homes in many architectural styles, including traditional, Craftsman, and Victorian. Home prices in Ladd's Addition typically range from $850,000 to over $2 million.

Northwest Heights provides ample opportunities for prospective homebuyers, whether they want to purchase a townhouse, a single-family home, or buy land to build their dream home. The community's architectural committee reviews all home plans before new home construction begins to ensure the home meets the community's aesthetic standards. Home prices in Northwest Heights typically range from $300,000 to over $2 million.

Northwest Heights and the Arlington Heights community border the Hillside community in Northwest Portland, just a 15-minute drive from downtown. Historic and halcyon, this eclectic neighborhood is one of Portland's best-kept secrets because it's tucked between more well-known areas. Unlike many communities in Portland, most of Hillside rarely run parallel with one another, going against the street-grid system the city is famous for. Hillside is just a short distance from Washington Park and the Oregon Zoo.

Prospective buyers will likely find a home to suit their tastes, whether it's a charming condo or a single-family home. Real estate prices in Hillside range from $125,000 to over $2.5 million.

Most well-known for its namesake, the Forest Park community is home to one of Portland's most popular nature parks, also called Forest Park. This serene, residential neighborhood is bordered by Northwest Heights, the Nob Hill community, and Linnton. Forest Park is a short, 10-minute commute to downtown, giving residents an ideal balance between natural serenity and big-city amenities.

Beyond the park, Forest Park is also home to the Audubon Society of Portland and Quail Creek Ranch. Buyers interested in this area will typically find condos or single-family homes. Forest Park real estate has a median listing price of approximately $1.1 million.

Discover Your Dream Home in One of Portland's Most Expensive Neighborhoods

As the Portland metropolitan area grows, more and more residents search for homes in beautiful yet tight-knit communities. Not only is Portland, Oregon, one of the country's most unique cities, but it's also an incredibly vibrant metropolitan area with many distinctive neighborhoods with ample green spaces, hiking trails, coffee shops, breweries, and more. One of the most important things prospective buyers can do is spend time in each neighborhood, learning more about quirks and features. Because each community offers something special, buyers are sure to find the right one for them.