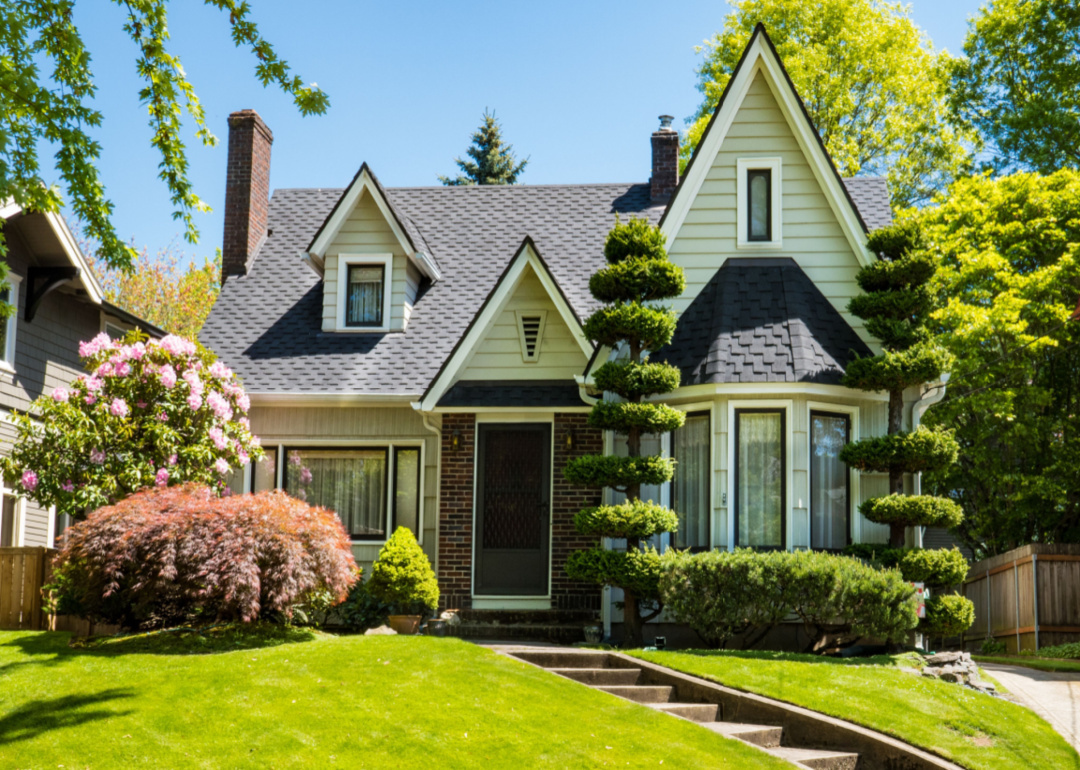 A homebuyer would be hard-pressed today to find a single-family home in most of America's major cities for under $200,000—and yet just 30 years ago, the typical home sold for nearly $124,000.

A shortage of new housing construction over the last three decades has caused U.S. home prices to balloon in urban centers—a trend that's only grown more pronounced since the 2000s. In fact, the average price of a single-family home in America's most populous cities has more than doubled since the year 2000.

Portland Real Estate examined data from the S&P CoreLogic Case-Shiller U.S. National Home Price Index to see how home prices in 20 major U.S. cities have changed in the last three decades. To account for seasonal changes, the yearly average was used. Data was not available for all cities going back to 1987, so in those cases, the oldest available year's data was used.

The S&P CoreLogic Case-Shiller U.S. National Home Price Index was developed in the 1980s as a way to measure single-family home prices in the U.S., and serves as the real estate industry's standard in measuring nationwide home price trends. Each value in the index is calculated by measuring the quarter-over-quarter change in average home purchase price. To normalize the data, the price of homes in January 2000 equals 100.

At the turn of the century, American families were coming off of a 10-year period in which U.S. standards of living had increased significantly. In 2000, a 30-year fixed rate mortgage carried an average interest rate of 8%, and the median home price was $119,600.

Throughout the 1990s and into 2000s, educational attainment and incomes were improving for Americans. More than 90% of people living in the U.S. owned a vehicle for the first time in recorded history, and they began spreading out across the country, moving to job centers that were shifting from the Northeast states into Texas, the Southeast, and Intermountain West.

By 2021, homes in Western cities were the most expensive on average, compared to other major cities in the U.S. Now that the Federal Reserve has pushed mortgage interest rates above 6%—the highest rate since the 2008 housing crash—the median American home price has skyrocketed to $440,300 this summer.

Dream of buying your own home in Portland? Browse condos, luxury homes, or waterfront homes, and find a picture-perfect getaway home today. 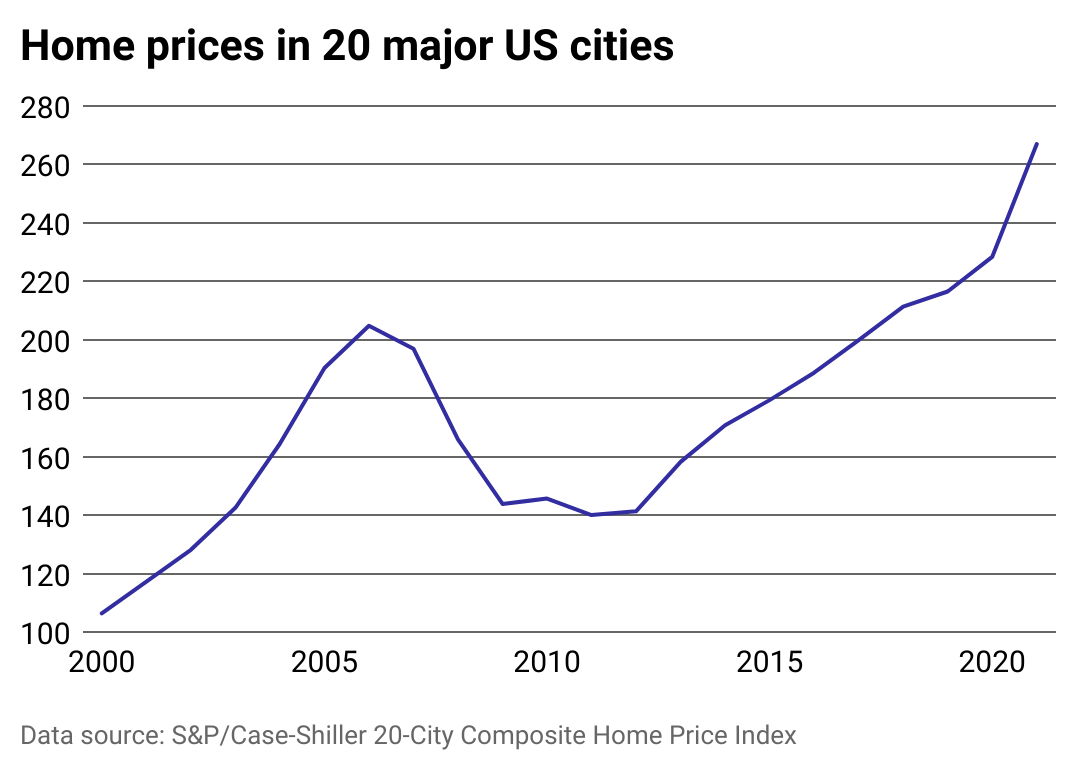 The average interest rate for a 30-year fixed rate mortgage in 1990 hovered around 10%, according to the St. Louis Fed. By 2003 that rate had dipped below 6%. The early aughts saw a financially empowered cohort of Americans reaching for the dream of homeownership and overzealous banks making risky loans. The pairing fueled massive gains in the real estate market nationwide between 2000 and 2006, before it all came crashing down.

Between 1994-2006 subprime home loans grew to be 20% of all home loans. A subprime loan is one provided to a borrower who has a less-than-ideal credit history, which carries a higher-than-usual level of risk for the lender. Defaults on those loans triggered a domino effect of repercussions for financial institutions that ultimately crippled the global economy, and dragged housing prices downward in the largest major cities. The late 2000s housing recession's effects lingered, until home prices began their upward trajectory in the summer of 2012. 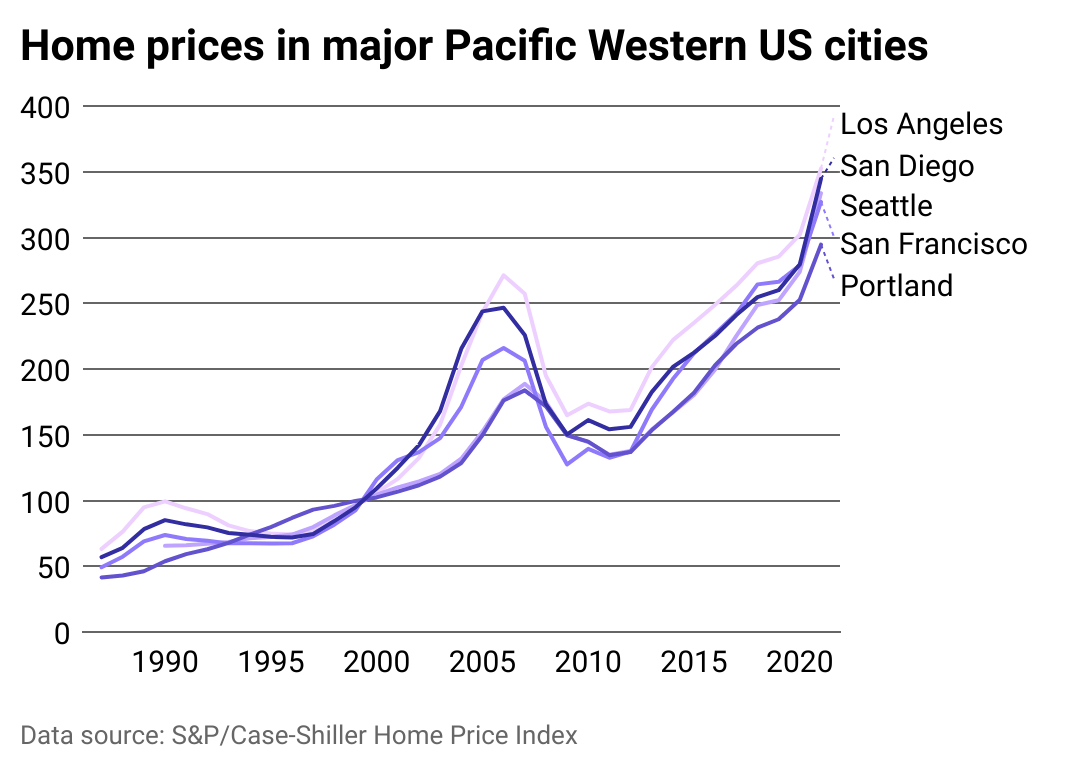 Cities in the Pacific West

Since 2000, home prices in major West Coast cities have risen well above the average prices of all major U.S. cities combined, according to Case-Shiller Home Price Indices. In September 2000, headlines celebrated Los Angeles median home prices hitting records not seen since 1989, after which the U.S. experienced a recession beginning in 1990, when Iraq invaded Kuwait, and energy supply disruption from the Persian Gulf War drove up gasoline prices for commuters. The median home sale price in LA was $211,150, down about $18,000 from nine years prior.

Fast forward to 2022, and the typical home in LA now sells for just under $1 million, driven higher than any other major metro, according to Case-Shiller data, by decades of underbuilding in Southern California.

Houses for Sale in Portland

Whether you’re looking for a historic home or a brand-new build, our top-rated team at Matin Real Estate will help you find homes for sale in Portland. 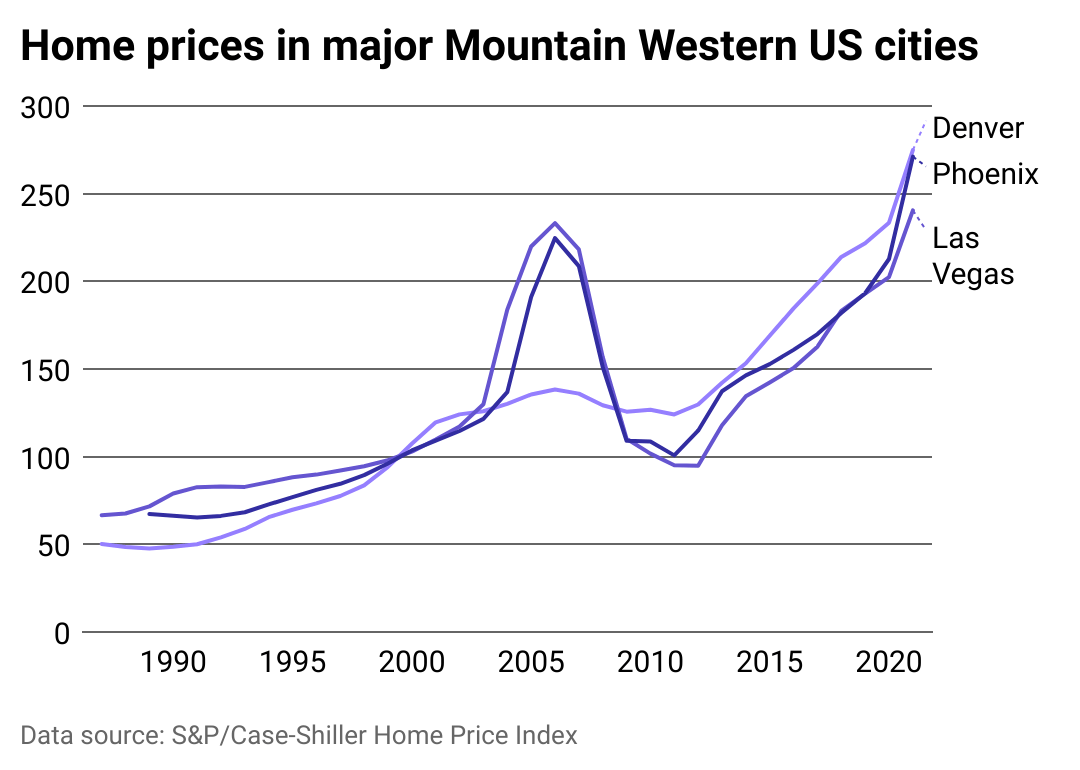 Cities in the Mountain West

Among major cities in America's Intermountain West, Denver has seen average home prices increase the most since 2000. The Mile High City dodged the boom-and-bust of the 2000s housing bubble, sparing average home prices in the area from the steeper collapses recorded in Phoenix and Las Vegas. 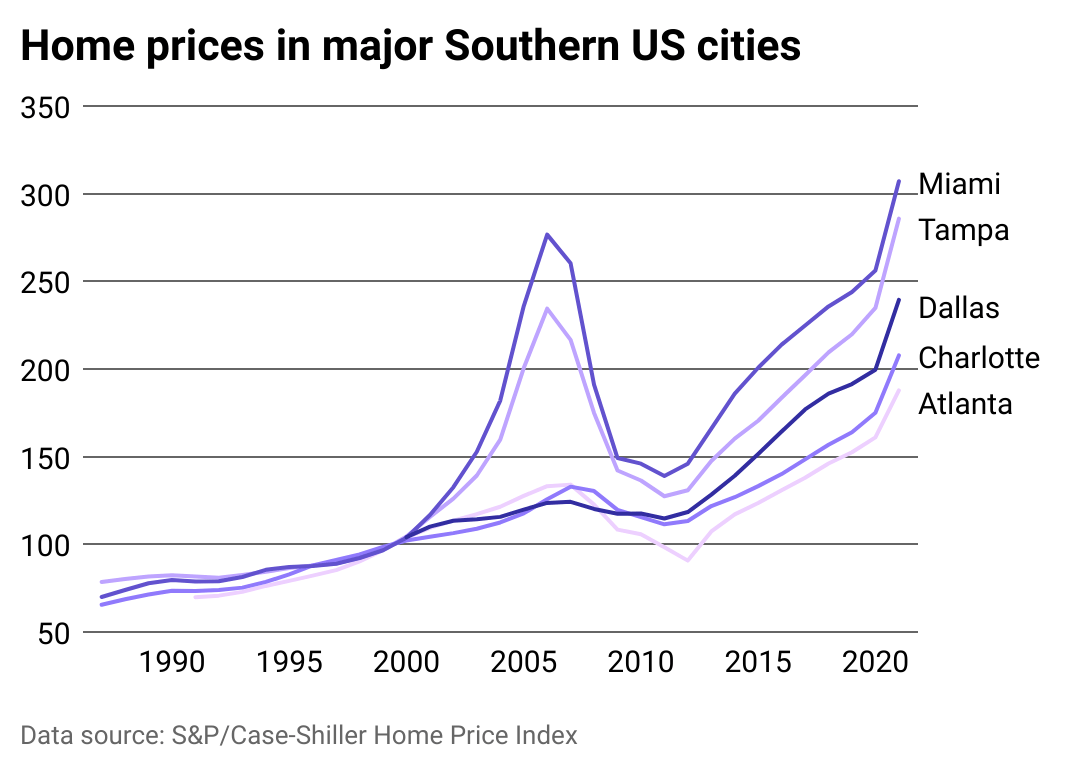 Cities in the South

In the South—or mostly the Southeast—it's Miami that leads the region in home price gains since 2000, followed by Tampa, Dallas, Charlotte, and Atlanta. Miami home prices broke from the pack around 2003, and have risen at higher rates year after year ever since.

Following the housing collapse of the 2000s, the state's trend of strong job creation, a booming oil and gas sector, and migration from other states helped Texas bounce back quickly from the ensuing recession. By 2011, home prices in Dallas were heating up quicker than in Charlotte and Atlanta—the latter of which experienced an exceptionally prolonged decline in average prices. 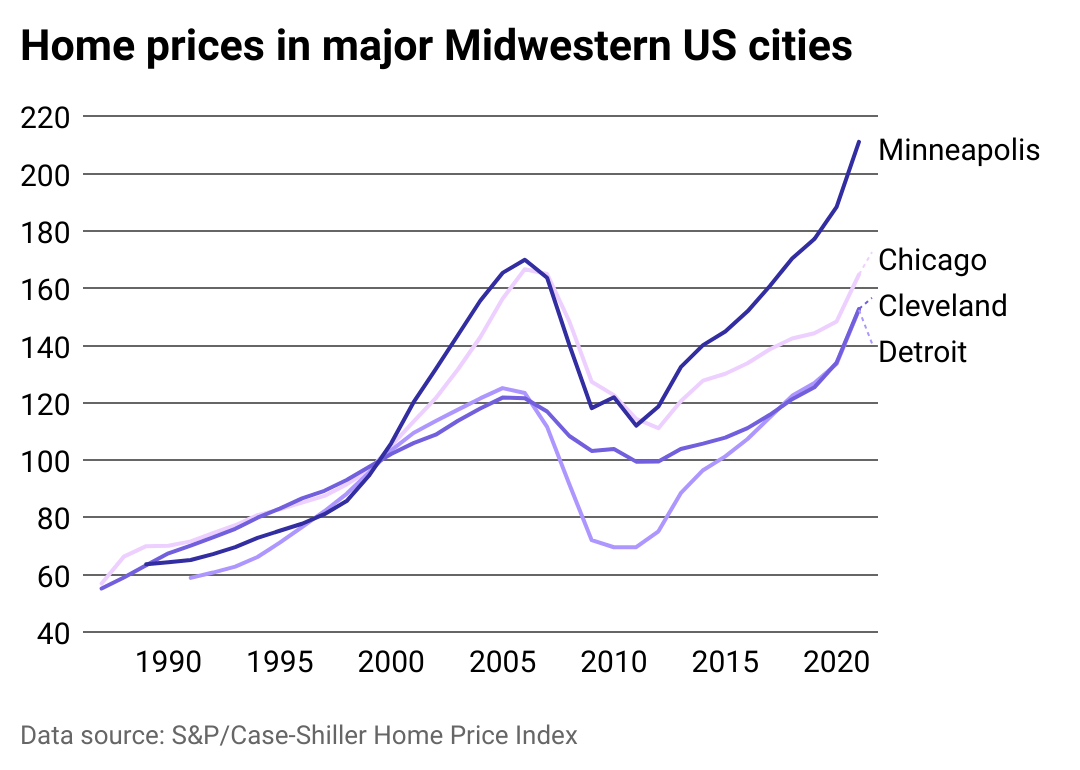 Cities in the Midwest

Minneapolis home prices increased faster on average coming out of the Great Recession than Chicago, Cleveland, or Detroit—which famously suffered among the deepest downturns of all major Midwestern metros due to its heavy exposure to the outsourced automobile industry. By 2015, home prices in Minneapolis were outpacing other major cities in the Midwest due to low inventory, though the Twin Cities were still growing at a slower rate than the national average.

Starter Homes for Sale in Portland

If you’re a first-time homebuyer, uncover the best starter homes for sale in Portland. See up-to-date listings or schedule a private tour today. 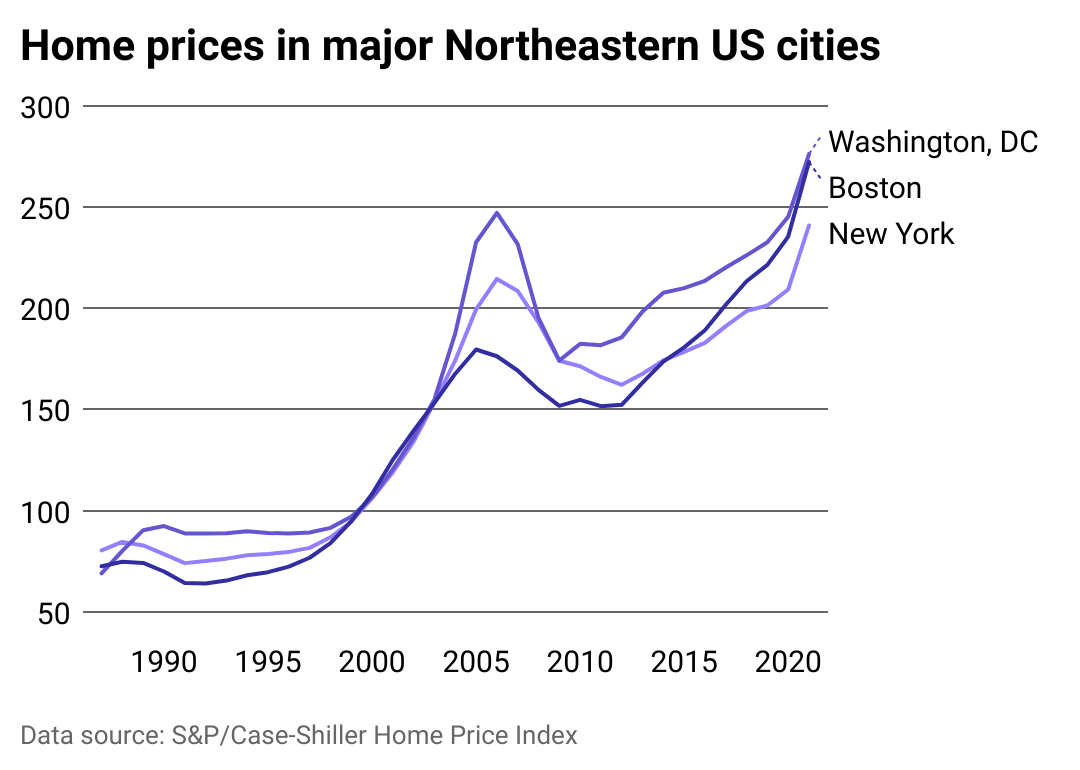 Cities in the Northeast

While New York gets plenty of headlines for being an expensive place to live, home prices in Washington D.C. and Boston have grown at a faster rate than in New York State since at least 2015. Washington D.C. home prices skyrocketed the most between 2004 and 2006, before crashing down to Earth when the 2000s housing bubble collapsed. Home price growth in the Northeast picked up rapidly at the turn of the century, bolstered by lower interest rates.